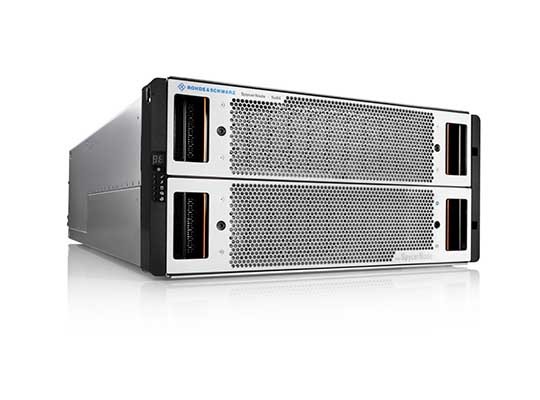 As a film mastering and distribution house, MPS offers unparalleled expertise in Digital Cinema Package (DCP) creation for Hollywood studios, but its services reach far wider, encompassing many independent movies.In an average month MPS will work on at least three major features. For a global release, it can create DCPs for up to 35 different territories all of which MPS handles on its eight CLIPSTER mastering workstations.

Now, to support this large CLIPSTER network, MPS has invested in two 5U84 SpycerNode storage systems from Rohde & Schwarz. The two systems are configured in a synchronous cluster spread over two locations. One part of the cluster is in MPS’ Mission Hall site in Olympia, London, and the other in a data centre 11km away. They are connected by two diverse dark fibres running 100 gigabit ethernet over CWDM optical multiplexing. The data is immediately copied to another location, giving instant backup.

One key feature of SpycerNode is its integration of IBM’s Spectrum Scale technology, formerly known as General Purpose File Systems (GPFS). Eric D’Souza, Head of Technology at MPS, sees this being key to the performance that SpycerNode offers his operations. “Spectrum Scale is more advanced than the previous SAN file systems and uses 100gigabit ethernet as the interconnection,” he explains. “Unlike layer 2 fibre channel, 100 gigabit ethernet allows redundant layer 3 network topologies to be extended over metropolitan distances. It is also much faster and more affordable. Networking and storage now share a common advanced topology.”

“The bottom line is that the SpycerNode system and provides fast storage for the CLIPSTER,” states Eric D’Souza. To understand how this directly translates into a significant business advantage for MPS, we need to look further at how they use the CLIPSTER mastering and distribution platform.

MPS will version the DCPs based on markets. For a big release they might have 120 shots that need localisation and graphics work. This could include road signs that might be in a particular language that need to change according to the territory, or as on one project, MPS had a shot of a mobile phone that had a vital text message on it and they had to cut that out and write it back out in 32 different languages.

Any sort of editorial trimming that MPS need they can do within CLIPSTER. On a typical project, film masters will be in DCDM format (Digital Cinema Distribution Master) or DCP. They come in via Aspera to our Data I/O department where they are ingested on to SpycerNode. From here any clips that need localisation or modification are exported using CLIPSTER MPS teams work on the shots with a combination of tools including Adobe After Effects, Cinema 4D and Nuke, before dropping them back into the timeline on the CLIPSTER ahead of mastering to DCP and distribution.

MPS has to be able to service clients with the very latest technological needs as well as all the traditional deliveries. They can see advantages in fulfilling versioning within the IMF package, particularly with respect to demand for VOD. To do another VOD version in its pipeline is relatively straightforward, so the fact that the CLIPSTERs are all IMF-capable was one of the reasons for buying so many of them. Another of the key features for CLIPSTER is the colour processing engine. MPS have to service the HDR market and this allows them to work with Dolby Vision HDR for cinema as well as being geared up to do HDR for VOD.

These advanced workflows require similarly state-of-the-art storage facilities and it was a straightforward decision for MPS to invest in SpycerNode when it became commercially available. “SpycerNode provides a single large fast namespace for all systems working on a project,” explains Eric D’Souza. “Data does not need to be moved during the workflow – this improves efficiency and profitability throughout our operations.”

“CLIPSTER is a unique product that is at heart of mastering DCPs at MPS. It was essential that our new storage architecture would provide outstanding support for CLIPSTER and with SpycerNode this was never in doubt,” Eric D’Souza concludes. “Rohde & Schwarz provided the support to ensure that both systems would be fully integrated from day one within our very specific requirements at MPS. CLIPSTER and SpycerNode improve the efficiency and stability of the operation at MPS.”