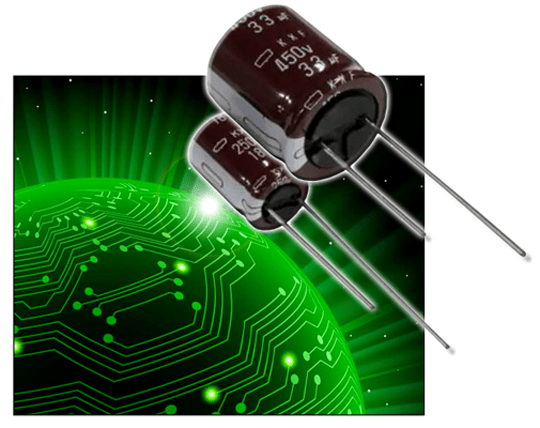 This series is guaranteed at 15,000~20,000 hours of operation for LED Lighting Circuits and other long-life, high-voltage power applications. The KXF Series is rated at a voltage range of 160Vdc to 450Vdc and a capacitance range of 5.6uF to 68µF. It is a polarized, non-solvent resistant type capacitor that is RoHS2 Compliant. The 10mm – 18mm diameter long life, high voltage capacitor (450Vdc) is perfect for areas where more endurance life is needed.

UCC KXF AECs offer a longer life than its predecessor, the barrier-breaking KXJ series. The KXJ was the industry leading family of radial leaded input filters that are used in many high reliability applications such as LED lighting, chargers, buck-boost converters and miniature switching power supplies.The new KXF series endurance is boosted by using a proprietary electrolyte and aluminum foils – optimizing their internal structure. They are ideal for high-reliability applications such as LEDs, chargers, buck-boost converters, and miniature switching power supplies.

United Chemi-Con, a wholly owned subsidiary of Nippon Chemi-Con, manufactures its own foil according to its own very strict standards. This allows UCC to control the entire process and supply broader product offerings. UCC is one of the few companies to supply Polymer and Electrolytic Capacitors as well as a Polymer-Electrolytic hybrid.

United Chemi-Con was established in the United States in 1970. The company is the largest manufacturer and supplier of aluminum electrolytic capacitors in North America, with more than 8,000 unique products available. New Yorker Electronics is a franchise distributor of United Chemi-Con and carries its full line of Capacitors, radial lead, SMD and snap-in aluminum electrolytic capacitors, as well as electric double layer capacitors.