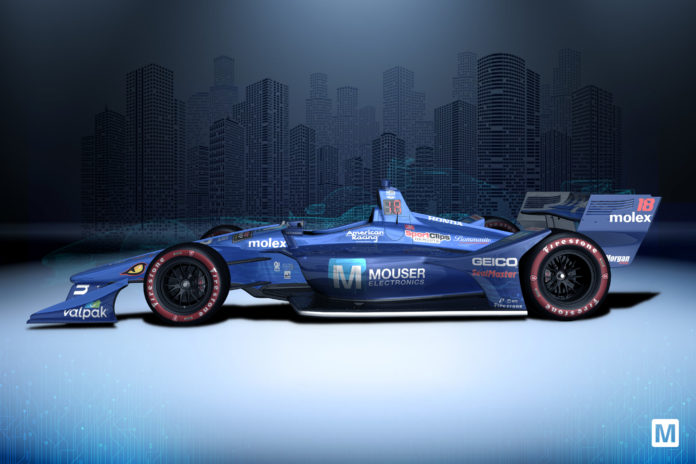 July 10, 2019 – Following a solid race in Wisconsin, the Mouser- and Molex-sponsored IndyCar team is setting their sights on Honda Indy Toronto on July 14, where the car will be sporting a Mouser Blue livery for the second year in a row.

Driver Sebastien Bourdais and the Mouser-sponsored No. 18 Dale Coyne Racing with Vasser-Sullivan car collected another 18 points at the famed Wisconsin Road America course. Now all eyes will be on the Toronto race and the sharp-looking No. 18 car as championship driver Bourdais navigates the tight 11-turn, 1.786-mile course through scenic downtown Toronto — about an hour’s drive from Mouser’s Canadian Customer Service Center at Kitchener-Waterloo in the Ontario technology corridor.

“We wish Sebastien and the team the best of luck as they take to the streets of Toronto in the ‘Mouser Machine’ for the second year in a row,” said Todd McAtee, Mouser Electronics’ Vice President, Americas Business Development. “The collaboration between this team, Mouser Electronics, and Molex is a testament to our collective commitment to excellence.”

“We are excited to cheer on Bourdais and the team as the No. 18 car flies Mouser and Molex colors this weekend,” said Fred Bell, Vice President of Global Distribution, Molex. “All of us at Molex are honored to once again team up with Mouser to sponsor the No. 18 car this season. This sponsorship further demonstrates our commitment to our long-term relationship with Mouser, to our joint customers and to new innovations in the automotive industry.”

Mouser Electronics is proud to again team up with valued supplier Molex to sponsor Bourdais and the Dale Coyne Racing with Vasser-Sullivan team for the entire 2019 NTT IndyCar Series. The 2019 season marks the 24th year of the IndyCar Series.

Mouser first sponsored IndyCar racing in 2011 as an inventive way to communicate its performance-driven business model and promote the newest technologies. The Mouser- and Molex-sponsored car won the Indianapolis 500 in 2013 as well as the 2017 and 2018 series-opening races at St. Petersburg, Fla.

After the Toronto race, the series moves to the Iowa 300 on July 20, followed by four more races before the season finale in Monterey, Calif., on September 22.