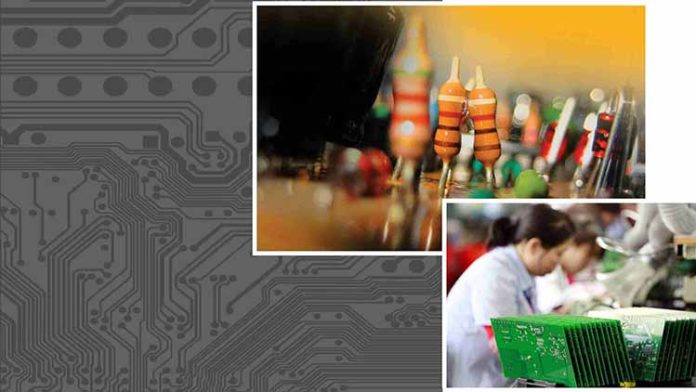 The electronics industry is one of the fastest growing industries in India, both in terms of production and exports. The Indian electronics products demand is expected to grow at a Compound Annual Growth Rate (CAGR) of 41 percent to touch US$ 400 billion by 2020.

The Indian electronics industry saw growth in the early years of the 21st century, encouraged both by the government policies, incentives and by the international investment. Its key and most resource-intensive segment, the semiconductor industry benefitted from the domestic demand inclining briskly. Semiconductors were required by a large number of industries, including telecommunications, information technology, industrial machinery and automation, medical electronics, automobile engineering, power and solar photovoltaic, defence and aerospace, consumer electronics and appliances.

Manufacturers and machine builders are facing tremendous challenges because electrical devices enter the market within very short intervals of time. A separate line usually has to be built for each product and then dismantled again after short production cycles. Machine builders not only need to be able to deliver their new machines in a very short period of time but also they have to be able to adapt them to short – term changes. The commissioning phase of machines and lines as well as changing from manual to automated production both offer the potential to save a significant amount of time and to meet the challenging time constraints of the electronics companies.

India is a net importer of electronics goods, with the majority of India’s imported electronics coming from China. In 2015, electronics overtook gold and is placed immediately after crude oil as the second most valued category of imports to the country. In 2019, Prof. Vikram Kumar, emeritus professor in physics at IIT Delhi revealed that India is spending more money on the import of the semiconductor than oil.

Electronics exports from India were estimated to be around $7.66 billion in FY13, a slight decline from $8.15 billion in FY12, although in INR terms, they grew from 44,000 crore rupees to 46,300 crore rupees in the same period, owing to the depreciation of the rupee. The telecom segment dominated the India’s electronics components, instruments, consumer electronics and computing. Technological improvements and competitive cost-effectiveness are thought to be the key drivers behind the growing demand for Indian electronics products abroad. In rupee terms, Indian electronic hardware exports almost doubled from 109940 crore in 2009-10 to 196103 crore in 2013-14.

From 2016, local manufacturing of electronics has risen, beginning a turnaround at a time when the Indian exports have been relatively weak. In January 2016, electronic imports, which accounted for 27% of India’s yearly trade deficit, shrank by 2.2% to $3.2 billion, while electronic exports rose 7.8% to $0.5billion.

To promote overall growth and open job opportunities, projected to be more than 28 million by attracting investments worth $100 billion, the Indian cental government has sought to reduce the country’s electronics import bill from 65% in 2014-15 to 50% in 2016 and gradually to a net zero electronics trade by 2020. India has persued a two-pronged strategy of import substitution and export encouragement, through the Make in India campaign coupled with the Digital India campaign, along with the Startup India and the Skill India campaigns. The government has fostered an environment conductive to foreign direct investment (FDI) inflow in a number of ways, as outlined in the National Electronics Policy and the National Telecom Policy.

The National Institution for Transforming India (NITI Aayog), a policy think-tank under the Indian central government, has suggested in a draft report that a policy be adopted to provide a tax holiday for a period of ten years to firms investing US$1 billion or more that also create 20,000 jobs. The report, hinting at a policy tilt toward the Information Technology Agreement-2 (ITA-2), also suggests that India should re-strategize its defensive policies regarding Free Trade Agreements (FTAs) and aggressively persue export-oriented policies to utilize these FTAs as opportunities to obtain duty-free access to the electronics markets of its FTA partners.

With the newly heralded era of Internet of Things (IoT) dictating that the new generation of interconnected devices to be capable of smart computing, Indian semiconductor industry is set for a stable upsurge with bright prospects provided India’s generic obstacles like redtape-ism, fund crunch and infrastructural deficits are adequately addressed.

The fast growing electronics system design manufacturing (ESDM) industry in India has vibrant design capabilities with the number of units exceeding 120. As stated by the Department of Electronics and Information Technology (DeitY) approximately 2,000 chips are being designed in India every year with more than 20,000 engineers currently employed to work on the various aspects of IC design and verification. According to a NOVONOUS report, the consumption of semiconductors in India, mostly import-based, is estimated to rise to $52.58 billion by 2020 at a dynamic CAGR of 26.72%. The report estimates that the consumption of the mobile devices will grow at a CAGR of 33.4% upto the year 2020. Moreover, the telecom segment is also expected to rise at a CAGR of 26.8% upto the year 2020. The information technology and office automation segment are estimated to grow at a CAGR of 18.2% upto the year 2020. The consumer electronics segment also is expected to grow at a CAGR of 18.8% over the seven years. The automotive electronics segment is expected to grow at 30.5% CAGR upto the year 2020. The EDSM industry will also grow on the back of these high consumption –led industries. Currently, almost all the semiconductor demand is met by imports from countries like the USA, Japan and Taiwan. In the semiconductor sector, India has a significant human-capital pool which is currently concentrated in design, in the absence of an end-to-end manufacturing base. But the nascent ESDM segment in India is premised on the competent domestic research by the Indian universities and institutes across the entire semiconductor manufacturing value chain, namely, chip design and testing, embedded systems, process-related, EDA, MEMS and sensors etc, which have contributed to a voluminous number of research publications.

Initiatives In The Semiconductor Industry

The government allows 100% FDI in the ESDM sector through an automatic route to attract investments including from Original Equipment Manufacturers (OEMs) and Integrated Device Manufacturers (IDMs) and those relocating to India from other countries, in addition to EMC, MIPS and other incentives and schemes provided to the electronics sector.

The Department of Electronics and information Technology (DeitY), in line with Skill India campaign has launched an INR 49 crore scheme for capacity building in ESDM. Infineon Technologies, a German semiconductor firm partnered with National Skill Development Corporation (NSDC) to enhance skill and manpower in semiconductor technology, aimed at boosting the ESDM ecosystem in India.

The India Electronics & Semiconductor Association (IESA) has announced a SPEED UP and SCALE-UP of its talent development initiative to be implemented through the Centre of Excellence with Electronics Sector Skills Council of India (ESSCI) and an MoU with the Visvesvaraya Technological University (VTU) and the RV-VLSI Design Centre to build human capital in the ESDM field. ESSCI, which has developed over 140 Qualification Packs (QP)/National Occupation Standards (NOS) across 14 sub-sectors of which Embedded System Design and VLSI are the key domains absorbing engineers, established their first-ever Centre of Excellence (CoE) at BMS college of Engineering for VLSI and embedded system design. IESA signed an MoU with Taiwan Electrical and Electronic Manufacturers Association (TEEMA) to encourage cooperation in technology and knowledge transfer alongwith investment commitment to domestic ESDM sector that can benefit both Indian and Taiwanese companies. IESA also entered into a MoU with Singapore Semiconductor Industry Association (SSIA), with an objective to forge trade and technical cooperation tie-ups between the electronics and semiconductor industries of both the countries.

The Department of Electronics and Information Technology (DeitY) has established an Electronics Development Fund (EDF) managed by Canara Bank (CANBANK Venture Capital Funds or CVCFL) to provide risk capital and to attract venture funds, angel funds and seed funds for incubating R&D and fostering the innovative environment in the sector. The establishment of “Fund of Funds for Start-ups” (FFS) approved by the union cabinet as part of the EDF for contribution to the various Alternative Investment Funds (AIF) or daughter funds, registered with Securities and Exchange Board of India (SEBI) which would extend the funding support to the start-ups, in line with the Start-up India Action Plan unveiled by the government which would be beneficial for the start-ups in the ESDM space, according to the IESA.
The National Centre for the Flexible Electronics (NCFlexE) at IIT Kanpur, the National Centre for Excellence in Technology for Internal Security (NCETIS) at IIT Bombay and the Centre for Excellence for Internet of Things at NASSCOM, Bengaluru have been set up to promote the development of national capability in ESDM.

Hyderabad based semiconductor chip design services entity SoCtronics completed the first 28nm design chip to be developed in India. Bangalore-based Indian company Navika Electronics has designed GNSS/GPS SoC (System on Chip) chipsets based on ARM core processors under its own brandname for the portable applications like receiving/down conversion and amplification of the GPS and Galileo signals.

The Centre for Nano Science and Engineering (CeNSE), IISc, Bengaluru, in collaboration with KAS Tech, a Bengaluru- based electronics manufacturing company, has developed ‘Ocean’, a highly integrated and portable chemical vapour depositor that can commercially produce various two dimensional materials including graphene, in an easy ‘plug and grow’ approach which can have various novel applications in the ESDM sector, for both academia and industry alike.

It could be viewed as a breakthrough for the country’s electric automobile programme as well as indigenous electronics manufacturing, the Indian Space Research Organisation (ISRO) and the Automotive Research Association of India (ARAI) together have developed and validated through tests, using ISRO’s state of art cell technology, a lithium ion battery prototype for application in electric vehicles and looks forward to commercializing the technology through mass production by partnering with the automotive companies. Currently India’s lithium ion battery requirements are completely met by import as there is no domestic manufacturing of these batteries. While the raw material for the batteries still has to be imported, rest of the value chain can be synthesized domestically at competitive cost, if the project clears all the batteries. Researchers at the Indian Institute of Technology-Bombay (IIT-B), in collaboration with the ISRO’s Semi-Conductor Labs (SCL), Chandigarh has developed an indigenous Bipolar Junction Transistor (BJT) which can function with Bi-CMOS (Bipolar Complementary Metal Oxide Semiconductor). Analog or mixed chips based on various digital Bi-CMOS technology with integrated analog high frequency BJT based amplifiers are essential for IoT and space applications like high frequency communications as they reduce form factor, power consumption, weight, size dimensions and cost etc.

Want to be a social media star?