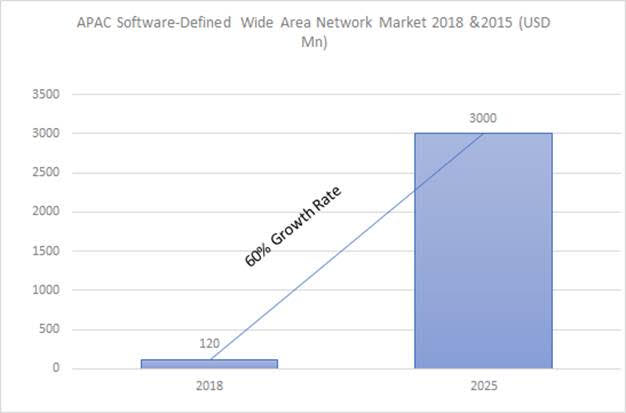 The increase in digitalization trends in the region is enabling SD-WAN to gain immense popularity in the region as enterprises are looking for cost-effective WANs to support connectivity options, such as DSL, Ethernet, and LTE, depending upon site requirements. Digitalization initiatives, such as smart city, are helping in rising investments in the digital infrastructure. Digitalization is driven by supportive government initiatives in the rapidly developing countries including China and India. For instance, in 2015, the Japanese government launched the Japan Revitalization Strategy, which focuses on the development of advanced robots, IoT technology, and AI. This strategy helped in accelerating digitalization in the country.

The virtual appliances solution shows the highest growth rate over the forecast period due to organizations’ demand for centralized management of the network to improve performance. Organizations are moving their workload to the cloud, enabling them centralized management of their network. Enterprises are looking for network solutions, which can reduce the time required for the deployment of SD-WAN technology and cost for the deployment of physical network infrastructure. Virtual appliances help these organizations with the rapid deployment of SD-WAN technology and reduce capital expenditure as these appliances use the existing hardware.

The IT & telecom application segment is estimated to hold the major share in 2025 due to the rising smartphone penetration in the region. The rising smartphone penetration also enabled the adoption of bandwidth-intensive applications. The high-bandwidth-intensive application demands are enabling telecom operators to shift to SD-WAN technology due to its benefits over the MPLS. The changing network demands of enterprise customers are enabling IT companies to migrate to SD-WAN technology due to its scalability and reliability.

Japan is expected to show significant growth rate over the forecast period due to its increase in the demand for the commercialization of the next-generation 5G network. The improved speed and capacity of 5G will increase the data traffic. The SD-WAN will help enterprises in handling such huge traffic. The enterprises in the country are investing in 5G technology. For instance, in June 2017, three Japanese mobile operators, KDDI, DoCoMo, and Softbank jointly planned to invest USD 45.5 billion for the commercialization of 5G networks. The Japanese companies are also investing in 5G deployments and are planning to launch them during the 2020 Summer Olympic Games.

The Asia Pacific SD-WAN market research report includes in-depth coverage of the industry with estimates & forecasts in terms of revenue in USD million from 2014 to 2025 for the following segments:

IR Detector Marketat a CAGR of 5% over