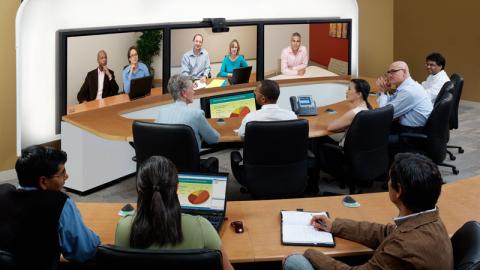 The global Consumer Telepresence market has been segmented on the basis of components, end use industry and geography. On the basis of components the market for global Consumer Telepresence market has been segmented into hardware, software and services. Again, hardware segment has been segmented into audio devices, display, projector, sensor and processors among other. In addition, software segment has been bifurcated into cloud computing software, server and audio and video communication software among others. In the year of 2016, the hardware segment held the highest market share among other component segment for Consumer Telepresence market. On the basis of end use industry global Consumer Telepresence market has been segmented into retail, government, education, research and development, manufacturing and aerospace and defense among others. This following report aims at estimating the market future growth and size potential of the Consumer Telepresence market across different end use industry segments. In addition, manufacturing segment is expected to reduce costs and the wastage of productive time in the long run by using this technology. This in turn is expected to increase the demand of Consumer Telepresence market during the forecast period. Moreover, small and medium enterprises are always focusing on reducing their travelling cost. By using this telepresence technology enterprises are able to experience a close-to-real presence of a person in another location and cut off their travelling budget. This factor as a major factor for growing the demand of this product market during the projection period. Moreover, increasing demand of robotic telepresence in healthcare industry systems allow one user to access the view video screen of additional user so that they can more vigorously follow the motion on their screen. This is adding more value to increase the demand of this product in coming years. On the flip side, higher installation cost and low bandwidth telepresence system is hindering the growth of this product market. Across the globe, customer preference towards voice over internet protocol (VoIP) technology and more convenience video conferencing technology in consumer electronics is expected to rise the demand of this product market in future. In addition, increasing focus on research and development activities by key players operating in Consumer Telepresence market is also acting as a driving factor in the growth of this market. Furthermore, effective communication through telepresence, secure data transmission is required which is added extra value during the installation of this system. This is expected to restrict the global market growth in the near future.

In-depth analysis of the micro and macro indicators, market trends, and forecasts of demand is offered by this business intelligence report. Furthermore, the report offers a vivid picture of the factors that are steering and restraining the growth of this market across all geographical segments. In addition to that, IGR-Growth Matrix analysis is also provided in the report so as to share insight of the investment areas that new or existing market players can take into consideration. Various analytical tools such as DRO analysis, Porter’s five forces analysis has been used in this report to present a clear picture of the market. The study focuses on the present market trends and provides market forecast from the year 2017-2027. Emerging trends that would shape the market demand in the years to come have been highlighted in this report. A competitive analysis in each of the geographical segments gives an insight into market share of the global players.

IR Detector Marketat a CAGR of 5% over