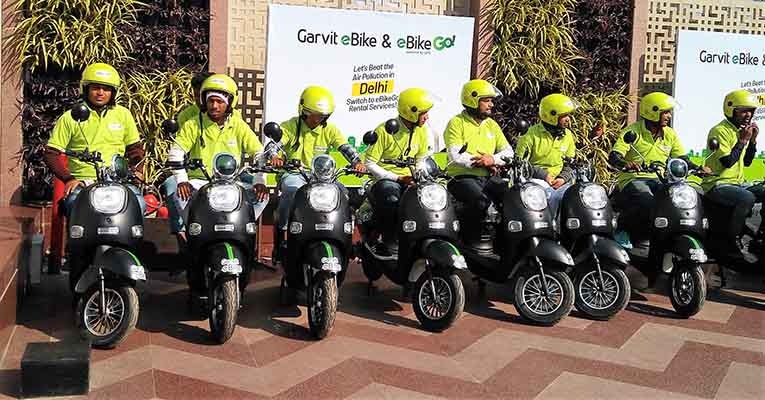 New Delhi, January 11, 2019: Garvit eBike has launched its world class electric scooters in Delhi recently. During this occasion, Mr. Sanjay Singh, Special Commissioner of Police, New Delhi was the Chief Guest. The programme started with the traditional lighting up ceremony by the Chief Guest. Thereafter, inauguration of the world class electric scooters has been done by ribbon cutting ceremony amongst other prominent dignitaries and guests.

During his speech, Mr. Sanjay Singh, Special Commissioner of Police, New Delhi said, “I heartily congratulate the team behind this concept and wish them all success in coming days. I appreciate the hard work and dedication put to bring these eco-friendly transportation to the people of Delhi. I would also recommend more and more women drivers to use Garvit eBikes and be a part of this endeavour of bringing down pollution in the city.”

eBikeGo will soon launch its operations in the city for people to adopt electric scooters for their transportation and to reduce traffic and pollution.

During his speech, Dr. Irfan Khan, Founder of eBikeGo said, “We are extremely proud to launch Garvit eBikes in Delhi today. Our aim is to expand our operations pan India which makes India to adopt an eco-friendly means of transportation and also makes travel cheaper and efficient for the fast paced lives of modern Indians. Garvit eBike uses lithium ion (Lion) batteries which is completely biodegradable and helps in decreasing the accumulation of hazardous electronic waste. By introducing these scooters our primary motive is to reduce pollution by atleast 2% this year which is emitted by petrol two wheeler. Garvit eBikes will be the most cost-effective means of transport in the city in the coming days. The cost of running is as minimal as 20 paisa/km for an average speed of 80 km/h and thus eBikeGo will be offering rentals starting with a minimum amount of Rs.20/- for 30 minutes”

Increasing pollution in Delhi has been a major problem for people as the level has increased beyond the severe level which is 40% above the level after Diwali no substantial step has been taken to reduce it. There are some interesting facts regarding the pollution level in Delhi has come up recently when compared to Bengaluru. The population of Delhi is about 65% more than Bengaluru, but the pollution is 600% more than that of Bengaluru. When compared with Mumbai which is the 4th largest populated city in the world records a pollution level which is 70% less than that of Delhi, the reason being a step which is taken in Bengaluru which is yet to be taken in Delhi. Bengaluru has introduced eco-friendly means of transportation and could increase the quality of air and a similar kind of initiative has been taken by Garvit eBike towards making Delhi an eco-friendly city.

As the government is too keen and want to bring in electric mobilization and want to reduce the pollution level. Our expansion shall be synonymous to Nation Development and eBikeGo shall be the heart of Smart India. eBikeGo is the future of Smart India and shall transform travelling in the city like never before. We will be highly privileged, if you can please ‘flash’ the same from your esteem portal.