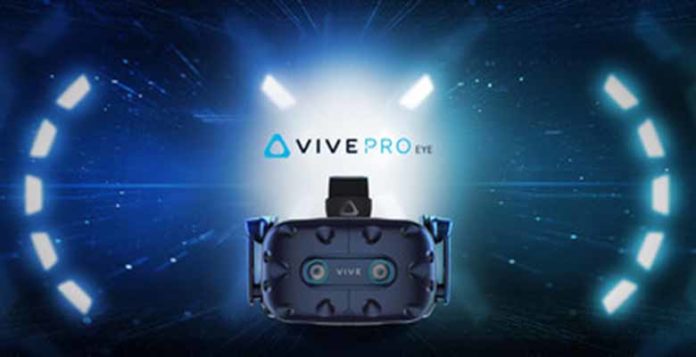 LAS VEGAS, Jan. 7, 2019 – HTC VIVE, the leader in room-scale Virtual Reality (VR), today announced new hardware, software, and content offerings that redefine how VR is experienced. With VIVE Pro Eye, a new headset with built-in eye tracking, the high-end VR experience from VIVE Pro just got even better. In addition, VIVEPORT, HTC’s global app store for VR content, announced unlimited subscription access with Viveport Infinity so all the best content is available at any time. HTC also unveiled a developer kit for a future headset, VIVE COSMOS, created with a new level of accessibility and ease of use. Revealed alongside Cosmos, the ‘Vive Reality System’ reimagines what VR should look like in the age of spatial computing, with fresh ways to display content and transport users between immersive environments. These latest advancements in premium VR not only offer best-in-class technology and content but strive to redefine how VR is accessed and experienced for both consumers and enterprise.

Vive Pro, built to meet the needs of the professional VR user, just got even better with integrated eye tracking on the new Vive Pro Eye—giving users new levels of accessibility, including gaze-oriented menu navigation and removing the need for controllers. With the inclusion of eye tracking, the new Vive Pro Eye will allow businesses and developers to gather more data about their training environments, help optimize computer and VR performance, and offer product design and research groups unprecedented levels of feedback.

“We’ve invested in VR technology to bring fans a fun immersive experience and connection to our game and deliver a new level of engagement through VR game competitions, at-home play and in-ballpark attractions,” said Jamie Leece, Senior Vice President, Games & VR, Major League Baseball. “By integrating eye tracking technology into Home Run Derby VR, we are able to transport this transformative baseball experience to any location without additional controllers needed. Our fans can simply operate menus by using their eyes.”

Vive Pro Eye is targeted at the enterprise market where eye tracking has a number of immediate benefits—from performance, to accessibility, to improvements in training applications. It will also benefit developers by minimizing computing resources needed to render high-end VR environments.

The new Vive Pro Eye will launch in the second quarter of 2019.

“Today, we’re announcing our next step in Viveport’s evolution with Viveport Infinity,” said Rikard Steiber, President, Viveport. “When we first launched our Subscription service, we gave consumers the ability to try 5 titles a month. Now with Viveport Infinity, we’re offering our members the best value in VR content with 100x more choice, all at one low price.”

Starting Vive Day, April 5, 2019, members can download and play any of the 500+ titles in the Viveport Infinity library with no restrictions. This unlimited subscription model will give members the opportunity to save thousands of dollars on top-quality content while allowing them to discover new experiences. With Viveport Infinity, members will be able to try hits from indie developers or shorter experiences they were reluctant to pay for while keeping their favorites like Seeking Dawn and Torn downloaded and ready to play. Members will be able access  Viveport Infinity across all current and future Vive devices as well as the Oculus Rift and other devices in the Wave Eco-system.

VIVE Cosmos
Unveiled for the first time today, Vive Cosmos is the newest VR headset from Vive, offering absolute comfort, and ease of set-up and use—ensuring consumers can access their virtual world whenever their life may call for it. With no external base stations required, Vive Cosmos maximizes flexibility of usage space, whether at home or on the go, and has the capability to be powered by more than a traditional gaming PC.

“We found that over 85% of VR intenders believe that ease of use and set up is the most important factor to consider while purchasing a headset,” said Daniel O’Brien, GM, Americas, HTC Vive. “We believe Cosmos will make VR more easily accessible to those who may not have invested in VR before and also be a superior experience for VR enthusiasts.”

With the introduction of Cosmos, HTC aims to redefine how VR is accessed by offering a headset that is quick to setup and use and can be taken on the go to new play environments. Cosmos will be the first Vive headset to feature the “Vive Reality System,” an entirely new design experience for VR.

HTC will first offer developer kits of Vive Cosmos in early 2019, and more details on availability and price will be announced later in the year.

“Our philosophy has always been focused on developing great products and experiences that create a natural and effortless bridge from the real world to the virtual world and with Vive Reality System we set out to reimagine Vive’s core software experience to meet these needs,” said Drew Bamford, VP, Creative Labs, HTC Vive. “The tools and environments that make up Vive Reality System aim to make spatial computing accessible to everyone, wherever their journey into immersive worlds takes them. We want VR to feel less like launching apps and instead like stepping between worlds.”

The Vive Reality System includes both operational and experiential elements impacting the entire Vive product portfolio and experienced first on the Vive Cosmos. As part of the project, Vive announced a deal with Mozilla to launch the first Vive-dedicated VR browser.

The Vive Reality System will power experiences across the entire Vive product portfolio and will be available first on the Vive Cosmos released later this year.