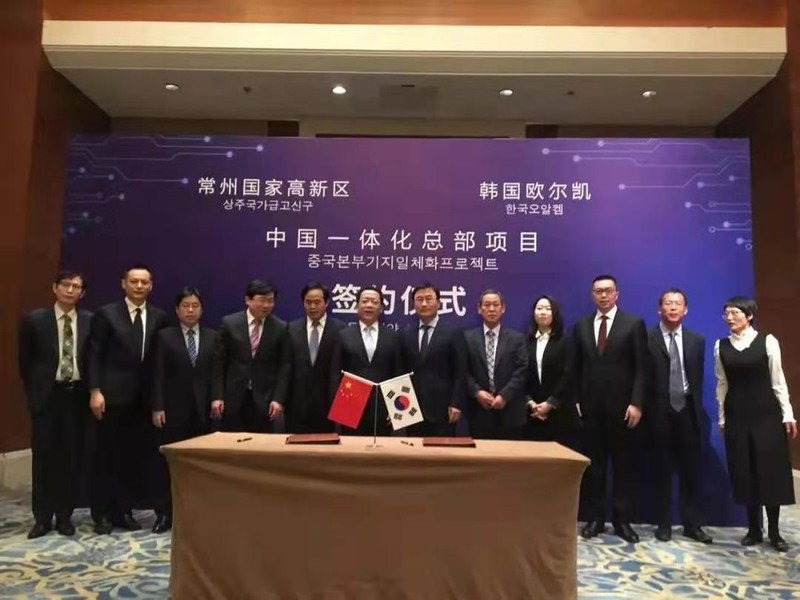 CHANGZHOU, China, March 4, 2019 – Ding Chun, mayor of Changzhou, Jiangsu province, China, met with a visiting delegation led by Lee Jae-Hyeon, President & CEO of South Korea-based printed circuit board (PCB) maker Orchem Co., Ltd., on the afternoon of February 27, 2019. The meeting was followed by a signing ceremony between the parties.

Orchem, South Korea’s leading PCB maker, boasts ownership of the country’s sole end-to-end production process for the handling of chemical materials used in the manufacturing of electronic components, a vital aspect of the PCB production workflow, within its pharmaceutical department. With the highest market share in South Korea, Orchem counts many of the world’s well-established firms among the purchasers of its products and services including Korea Circuit, SimmTech, Samsung, LG and Foxconn. Orchem plans to invest US$50 million to establish its China headquarters in Changzhou Binjiang Economic Development Zone. The facility will specialize in high-quality electronic chemicals used in PCB manufacturing through the deployment of advanced technologies and processes as well as state-of-the-art management approaches in a move to cater to the needs of Chinese customers.

Changzhou, a key manufacturing hub in the Yangtze River Delta and one of the most active contributors to China’s ongoing growth, continues to flourish in tandem with the expansion of the real economy and is achieving significant progress as it adapts and upgrades to meet the needs and expectations of the evolving economic environment. Mr. Ding explained that government departments at all levels are working together to create a favorable business environment that supports business growth. Choosing Changzhou as part of its strategic footprint was a wise step for the company. Changzhou and Orchem are well-positioned to achieve a win-win result via a government-enterprise cooperation model, as the project moves forward from contract signing to the construction and operation phases. Changzhouis confident in delivering one of the most favorable business environments in Asia and providing the best support for Orchem’s expansion in China via the partnership.

Mr. Lee said that since Orchem’s foray into China ten years ago, the PCB maker has always been at the forefront of what is new and emerging in the world of manufacturing. Orchem feels greatly honored to have an opportunity to establish a manufacturing and research facility in Changzhou, a city with a history going back 3,000 years. Orhcem and Changzhouplan to work together with the goal of each becoming the number one of its kind in Asia.