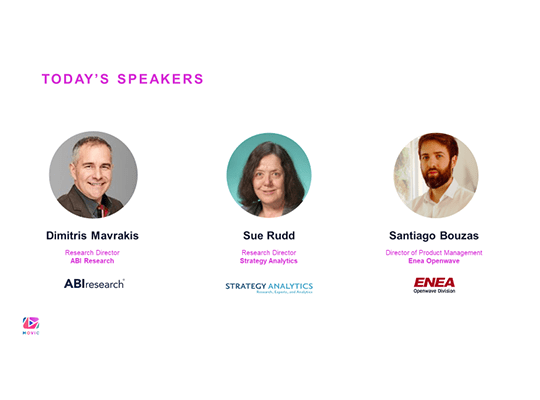 April 10, 2020 – “The Mobile Video Industry Council spoke to Dimitris Mavrakis from ABI Research, Sue Rudd from Strategy Analytics and Santiago Bouzas from Enea Openwave.” The panel analyzed latest data from country networks under stress such as in Italy and Spain where the current crisis is at its worst. What lessons can other operators learn as the ripple effect spreads globally?

Santiago Bouzas explained that the aggregated and anonymized data from many operators worldwide indicates – as expected – that mobile data consumption trends in almost all regions globally have been impacted by the pandemic. Data from the two main European hotspots since lockdown – Italy and Spain – revealed sharp spikes at times and also a general / averaged trend sharply upwards. These data trends are particularly relevant and indicate that the same could be replicated in other markets as lockdowns tighten.

In Italy, the first country in Europe to enforce a lockdown, peak throughput on the mobile network increased by up to 90% compared to the weeks before lockdown. During the first week after the lockdown in Spain, the mobile network experienced a 35% increase in throughput, while over fixed networks it increased 50%. Telefonica’s Movistar, Orange, Vodafone, Másmóvil and Euskaltel also reported that IP network traffic had increased 40%, while mobile had increased 50% for voice and 25% for data. In Italy, Spain and in most other countries, the increase in the volume of data is mainly driven by video. As an example, there has been a 20% daily increase in Amazon Prime traffic in Italy.

Also in Italy, WhatsApp has experienced a 20% year-on-year increase in the number of messages and calls, and Microsoft has seen 100% growth in usage of enterprise productivity application Teams.

Other parts of the world like South America are seeing an average growth of 25-30% in traffic. In India, which recently went into lockdown, there has been a 25% growth in the amount of data traversing networks.

How are operators responding to this crisis?

Operators are assisting in various ways. For example, Telefonica Spain increased mobile plans by an additional 30GB per month for two months, as well as providing extra content for TV packages. The Spanish carrier recently added 100GB for another two months. In the US, AT&T have waived fees for going over data caps and provided Internet data to limited-income households for $10 per month. T-Mobile and Sprint are providing unlimited data on all mobile plans for three months, as well as 20GB of mobile hotspot service during that time.

Dimitris Mavrakis, based in Athens, mirrored Santi’s observations about the growth in traffic and added that it has been heartening to see operators working hard to deliver connectivity and services to end users and being true to their corporate social responsibilities. In China and many other parts of the world, carriers have helped to deploy connectivity to brand new hospitals in record time. In fact 5G is being deployed in China specifically for fixed wireless applications to deliver connectivity, especially to medical facilities for life-critical applications.

Dimitris also observed that operators have been delivering connectivity and services to doctors and healthcare workers on the frontline in many parts of the world to save lives. Carriers have demonstrated huge responsibility during this crisis. Sue Rudd then provided a US perspective: While America at this stage is nowhere near as far along as Spain or Italy, it soon will be eg see charts on data growth of Netflix and gaming over mobile. So there needs to be sufficient capacity for the public safety networks.

There has been a major initiative to redesign the US public safety network after 9/11. Thanks to this, FirstNet is up and running on LTE.

AT&T have deployed spectrum on a national basis, some of which can be dynamically shared to increase the spectrum for first responders. And there is ramping up of connectivity on different levels. There is a “cell on wheels” to add capacity for emergency personnel in different locations, and there is a portable cell site for a drive-through Coronavirus testing facility. Additionally, there are in-building solutions to support first responders in new quarantine centers.

What’s being done to bend the communications curve for the traffic surge?

Of course, as Dimitris explained, both fixed and mobile networks have not been designed for this level of unprecedented stress or increase in traffic. Dimitris highlighted that the European Union has spoken to operators and content owners to make traffic more optimal for delivery on networks in order to alleviate congestion (see recent headlines on Netflix reducing the definition of video streams). Of course that doesn’t mean that networks will not congest anyway. There is only so much that content owners and delivery networks can do.

Santi mentioned that Netflix, Amazon and some video service providers are helping operators by readjusting their encoding rates. This is welcome for fixed and mobile operators, but it’s not a definitive solution. Operators do not have any real-time control to manage the traffic growth. For example, Netflix is not restricting higher resolutions; instead, it is readjusting and changing encoding for the existing qualities.

Of course, if the demand for Netflix keeps growing (and since most people are now based at home and many are no longer working, this is almost certain), it will only aggravate congestion, and there will be impact on other services, as well. This includes enterprise services and video conferencing. Even when adaptive bit rate technologies are used, video applications will always consume as much data as possible to keep up with the highest available quality. According to Santi, it is not sustainable to ask every over-the-top video service (out of the thousands that exist) to adapt their bitrates to meet every network’s requirement. So this solution only helps to a point.

It’s much more effective, explained Santi, if Operators can detect congestion – on the access network, aggregation points and backhaul – and respond dynamically to rightly balance video quality and impact in the network. This must be combined with traffic prioritization to guarantee essential services. A key lesson for operators globally is that congestion needs to be evaluated in real-time nationwide.

As an example, a Tier 1 operator in India quickly implemented a mechanism to feed the core network back with radio congestion indicators. Based on the congestion status observed in the network and how every location is behaving, this operator can take proactive action in real time to balance video traffic quality and data consumption and deliver a consistent QoE for subscribers without impacting essential services on the frontline of the pandemic.

What technology trends or issues have emerged?

So far, the combined business and home entertainment daytime peak is only about 20% higher than the traditional evening peak. But this is likely to change as businesses become almost entirely operational on the internet. The challenge is balancing the needs of business users who need to keep their companies going with the entertainment requirements of home-based users.

Moreover, European regulators don’t want to clamp down on consumers. As an example, Akamai is working with both Microsoft and Sony to schedule when downloads of new gaming updates occur. In regions where demand is creating bottlenecks for customers, Akamai, Sony and Microsoft are dynamically reducing gaming software downloads at peak times so they can be completed off peak time.

And Zoom, one of the most prolifically used applications that has rocketed in popularity during the lockdown, is hosted on Equinix. Equinix data centers have very good edge capacity for local processing. This does not burden the backhaul and the core network, so users experience faster connectivity and suffer fewer lags. Another example of where edge technologies can make a real difference. Sue expects new typologies to emerge during the recovery phase after the crisis that will lead to even more advanced edge services.

What impact will this have on 5G?

A number of analysts are trying to analyze and estimate the effect of the coronavirus on 5G. According to Dimitris, a number of new use cases are accelerating, especially in healthcare and with the digitalization of the enterprise and the current crisis will further push certain applications perhaps healthcare. Manufacturing, supply chains and logistics are all accelerating the enterprise aspects of 5G, as well as the mobile media segment.

According to Dimitris, skeptics may say that 5G will pause due to the world crisis – and indeed 3GPP Rel 16/17 specs have been delayed. However, he expects that 5G will continue as planned and may even accelerate. Once the crisis is over and we enter the recovery phase, the industry will start to see revived interest in enterprise applications for 5G, and consumer interest in 5G should also be rekindled.

These are unprecedented times not just for the telecoms industry, but for almost every business globally. Everyone is quite rightly focused on managing the curve while keeping safe, healthy and connected. Thankfully our industry is coming together to overcome these extraordinary hurdles with technology to help today and build a better future tomorrow.