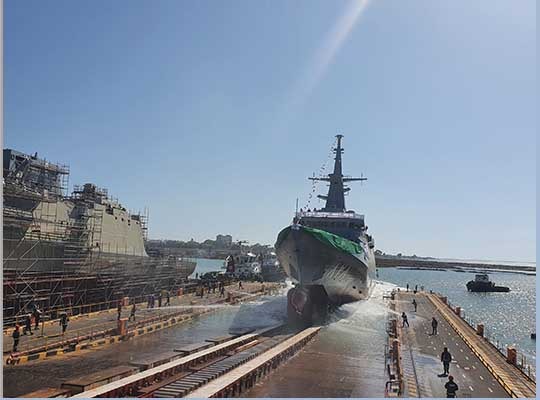 Construction NB 546/848 AL JUBAIL was launched at 17:22
• The President of Navantia, Susana de Sarriá, highlighted the good progress of the Avante 2200 program
• It has been months of work with the aim of meeting deadlines and delivering the last of the five corvettes in 2024

San Fernando | July 29 2020- Navantia has successfully carried out the launching maneuver of the first of five corvettes built for the Saudi Arabian Navy (RSNF). Named AL-JUBAIL, the ship has slipped from slipway number 2 to the sea at the San Fernando shipyard and has been chaired by the Commander of the Saudi Navy, Vice Admiral Fahad Bin Abdullah Al-Ghofaily; by the President of Navantia, Susana de Sarriá; by SAMI’s acting CEO, Walid Abukhaled; and by ALARDIZ, Vice Admiral Ricardo A. Hernández López.

The ceremony began with the reading of a few words from the Koran, carried out by the Commander of the Saudi Navy, after which a video was shown about the city Al-Jubail (city that gives its name to the ship) and a timelapse summary of the construction and that can be seen on the Navantia website. Then, the hymns of Saudi Arabia and Spain have started the speeches.

The Commander of the Saudi Navy has highlighted the importance of this project, contracted to Navantia, as one of the most important acquisition programs in terms of capabilities, which reflects a solid relationship between Spain and Saudi Arabia, and which reinforces cooperation between the two navies under construction, formation and training. In addition, he noted that the success of this program is key to future programs.

The acting CEO of SAMI has expressed his pride for the strong relationship between SAMI, Navantia and the Saudi Navy, and for the valuable collaboration that has been reflected in the launch of the first Saudi combat system, developed entirely by SAMI, which represents a fundamental pillar for the development of local capacities.

The President of Navantia has shown her commitment to the Saudi Navy to repeat the collaboration model achieved with the Spanish Navy and Australian Navy, and has highlighted Navantia’s purpose of contributing to the development of the country’s naval and industrial capabilities through from other future programs.

Next, the launch’s godfather, Commander Fahad Bin Abdullah Al-Ghofaily, has ordered Captain Abdullah Alshehri, director of the program’s office, to cut the ribbon on his behalf and the AL-JUBAIL corvette has begun his slide by the harrow until it touches water for the first time.

The AL-JUBAIL corvette has a length of 104 meters, a beam of 14 and will be able to transport a total of 102 people between crew and passage. It will reach a maximum speed of 27 knots and, among other aspects, it has the capacity to carry 21-day supplies on board.

The design of the corvettes is of the latest generation, maximizing at the same time the participation of Navantia by incorporating its own products, such as the CATIZ combat system, the HERMESYS integrated communications system, the DORNA shooting direction, the Integrated Control System Platform and MINERVA integrated bridge, along with other equipment developed by Navantia under license, such as MTU motors or RENK gearboxes.

Since the first plate was cut in January 2019, all the workshops in Navantia San Fernando and also in Puerto Real have worked tirelessly to ensure that this first ship is completed. This first corvette has been successfully completed despite the decrease in activity caused by the Covid-19 pandemic. Precisely, the safety protocols approved by Navantia have marked this event, in which all attendees have accessed with a mask and keeping the required safety distance.

From now on, the objective is to return to the initial deadlines, so that the next corvette can be launched next November. In fact, after the launching ceremony, Captain Abdullah Alshehri has been able to witness the progress in the construction of the second unit, “Aldiriyah” in Tier 3.

This contract, in force since November 2019, strengthens the immediate future of Navantia and benefits all of the company’s shipyards and its auxiliary industry, especially the entire Bay of Cádiz.

Specifically, it will suppose a global workload of around seven million hours that, translated into employment, will reach the figure of 6,000 annually during the next 5 years. Of these, more than 1,100 will be direct employees, more than 1,800 employees of the Auxiliary Industry de Navantia and more than 3,000 indirect employees generated by other suppliers. There will be more than 100 auxiliary companies that collaborate in it.

The program, whose last ship should be delivered in 2024, includes in addition to construction, Life Cycle Support for five years, from the delivery of the first ship, with an option for another five additional years.

On the other hand, the contract also includes the supply of various services such as, integrated logistical support, operational and maintenance training, supply of Training and Training Centers for the Combat System and Platform Control System for ships, Support to the Life Cycle, previously mentioned, and the systems for the maintenance of ships at the Jeddah Naval Base. 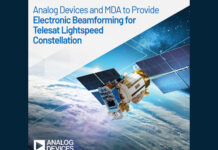 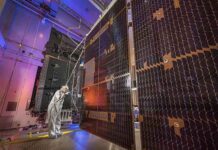 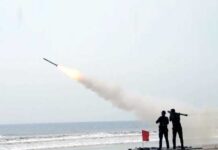