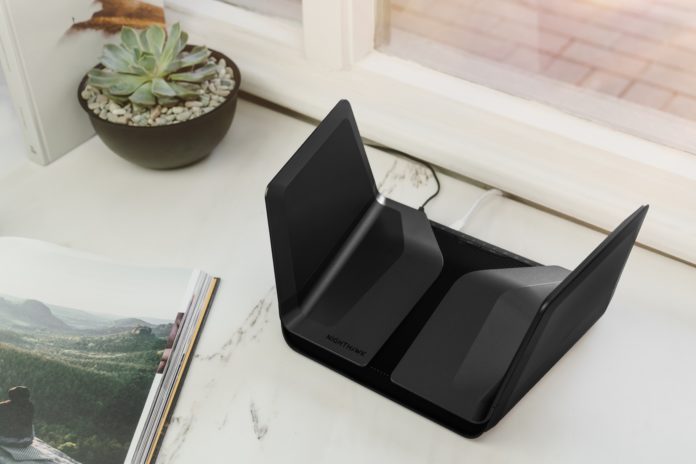 New Delhi: May 1, 2019 : NETGEAR, has announced the launch of its tri-band Wi-Fi 6 routers; the Nighthawk AX4 & AX8 in Bengaluru. Today’s households are dealing with an increasing number of connected devices and an increasing demand for greater bandwidth from streaming video, audio and online gaming. Add to this the plethora of smart home devices from IP cameras, voice assistants, smart thermostats and appliances, all of which are dependent on a constant connection to the cloud. These devices just increase the complexity of a network as they compete for bandwidth, pushing wireless home networks beyond the technical threshold for the current generation of Wi-Fi. NETGEAR has solved this modern-day dilemma with the introduction of a full suite of ultra-fast Wi-Fi 6 routers.

Wi-Fi 6 — the latest generation of Wi-Fi – delivers up to four times better performance than Wi-Fi 5 using innovative technologies such as Orthogonal Frequency-Division Multiple-Access (OFDMA) to help maximize the capability to connect multiple devices at the same time, which will help reduce the congestion for the typical bandwidth starved connected home. Wi-Fi 6 will provide a huge boost in total network capacity and reliability, ushering in a new era of speed, performance and capacity for wireless networking in today’s homes. The actual quality of the connection for each Wi-Fi device will also be improved by reducing the interference between them, thus ensuring that the experience of lag or buffering is reduced during online game play or streaming Ultra HD 8K/4K.

Speaking at the launch, Marthesh Nagendra, Country Manager – India & SAARC, NETGEAR added,  “With the increasing number of Wi-Fi devices in our home network, it is has become critical for NETGEAR to provide a solution where each device gets the Wi-Fi bandwidth it needs so that you can get the quality connected experience that you deserve.”

“The NETGEAR AX Nighthawk delivers super-fast Wi-Fi with better coverage and, more importantly, has the power and capacity to handle the dozens of devices in the typical congested smart home,” added Nagendra.

The Nighthawk AX8 features blazing-fast combined Wi-Fi speeds up to 6Gbps with an award-winning design recognized by both Red Dot and iF Design awards. Eight Wi-Fi spatial streams – four in the 2.4GHz band, and four in the 5GHz band – offer four times the device capacity as compared to typical 2×2 AC Wi-Fi. Multi-Gig Internet enables customers to get more than one Gbps of the Internet through aggregation.

Speaking at the India launch, Patrick Lo, Chairman and CEO of NETGEAR commented, “At NETGEAR we strive to push our boundaries with innovative technology and solutions. The previous Wi-Fi iterations have been largely about enhancements to speed, the AX Wi-Fi 6 router promises a number of other benefits such as lower battery consumption, ability to serve multiple users and devices at the same time and most notably increased capacity and reduced latency.”