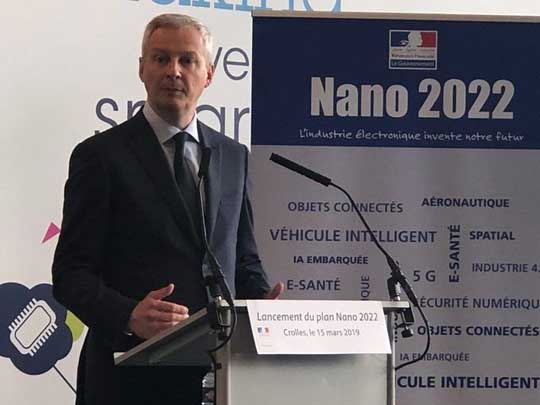 Crolles, France, March 16, 2019 – STMicroelectronics, hosted today the official launch of the French “Nano2022” program for the microelectronics industry. “Nano2022” was presented by French Minister of Economy Bruno Le Maire at the ST research, development and manufacturing site of Crolles, near Grenoble (France), in presence of representatives of national and local public authorities and of the French semiconductor industry.

“Nano2022” is a five-year public-private strategic support program targeting not only research, development, and innovation (RDI), but also First Industrial Deployment (FID). Support to FID is a key enabler for semiconductor companies which, like ST, are also manufacturing part of their chips through innovative proprietary technologies, as it targets the ever-difficult step between prototypes and volume production.

The program will also foster close cooperation with the French R&D ecosystem to which ST sites belong, with a broad range of partners – research and technology organizations, SMEs and startups, and large companies.

In the same perspective, the broader IPCEI for Microelectronics, which involves France, Italy, Germany, and the United Kingdom also supports both RDI and FID. ST has worked with both French and Italian public authorities for one single integrated proposal.

Further information can be found at www.st.com.