Low power DC/DC converters are commonly available in through hole versions but SMT types are preferred for compatibility with modern manufacturing techniques. New packaging methods and circuit innovations now make this possible while maintaining low cost and high power density. This article describes construction techniques for some DC/DC converter products that are now more like ICs in their handling, placement and soldering.

Low power DC/DC converters need to be cost-effective, despite ever-increasing demands for better performance and improved power density. Manufacturers have responded over time with many form-factors that leverage low cost manufacturing, often with a minimal component count and transformers and inductors hand-soldered to traditional PCBs. To minimize the PCB footprint, through-hole SIP versions are often used, though they can complicate the assembly, requiring to mix wave or even hand soldering with the reflow process for the other SMT components used on the board.

Although millions of this style of through-hole DC/DC converter are sold each year, a long-term goal for RECOM has been to develop versions which can be handled, placed and soldered like any other modern SMT component, but also with a low profile to match today’s slim-line products. However, the footprint must still remain small to realize the advantages of a converter module over a discrete design. To achieve this, DC/DC converter modules have to utilize the Z direction by integrating 3D assembly techniques.

The first SMT DC/DCs on the market were simply versions of potted through-hole types with the leads bent into ‘gull-wing’ shapes. These could not withstand a regular reflow soldering profile, so often still required hand assembly. A natural progression was to switch to a technique using an internal leadframe with high melting-point solder joints which was then injection-molded with material that could withstand IR-reflow temperatures. However, lead-free soldering raised peak soldering oven temperatures to over 300°C, causing difficulties with the reliability of internal joints and anyway, the lead-frame plus injection-molding technique only allowed for the inclusion of a few discrete components in the simplest of circuits, any IC being difficult to include. Since then, manufacturers have preferred open-frame converters to avoid any reflow soldering problems, accepting that the internal component solder joints would reflow again, but stay on their substrate. SMT pin terminations have varied from gull-wing to blocks and pillars to solder balls and more recently land grid arrays. This has become standardized as the DOSA format for SMT converters, with multilayer internal boards and planar magnetics, but also with the expectation that airflow is available for full output power. As modules, these products have a clear advantage over discrete solutions which could not easily fit in the same footprint. At low power however, cost considerations rule-out expensive multi-layer boards and components so the hunt for an ‘IC style’ solution continued.

Non-isolated DC/DC use has proliferated, initially often replacing the traditional ‘three-terminal’ linear regulators, but now used widely as higher input voltage Point-of-Load regulators, providing a set of precise low-voltage rails for highly integrated ICs such as CPUs, GPUs and SoC devices. Again, to confer a benefit over discrete solutions, a DC/DC module should occupy the absolute minimum footprint and height and run cool while meeting the exacting regulation and noise requirements of modern ICs. To achieve this small size implies high efficiency, which traditionally has meant low switching frequency and a consequently large output inductor – exactly the opposite of what’s needed. However, improved semiconductors, converter topologies and magnetic materials have allowed frequencies to push into the MHz range while maintaining excellent efficiency with a small inductor. This has allowed converter designers to be creative with the packaging and achieve astonishing miniaturization, even when the inductor is integrated into the package. For example, the RECOM RPX series has a footprint of just 4.5mm x 4mm and 2mm high in a QFN package, yet provides up to 2.5A of output current at a peak efficiency of over 90%. The 1A version is even smaller, just 3mm x 5mm x 1.6mm high. This power density is achieved with a low-cost flip-chip on leadframe construction with over-molding, with the added benefits that the tight switching current loops generate very low EMI, along with high power density and optimized thermal performance that cannot be matched by a discrete solution.

At higher powers, the RECOM RPMB/RPMH series are an example of a 30W part in a thermally-enhanced 25-pad LGA package 11.7mm x 12.19mm x 3.75mm high. This power density is achieved with a multilayer internal PCB which utilizes plugged and blind vias for good thermal conductivity and efficient use of the available space. Construction is a four-layer PCB enclosed by six-sided metallic shielding for low EMI. This type of construction is low profile, but needs a little over 1.4 cm² of real estate to allow proper heat dissipation in order to deliver full power at ambient temperatures exceeding +85°C.

The advantage of the RPMB/RPMH design is that the complex construction is all inside the module. The end-user can use a low-cost two-layer PCB without using expensive plugged vias, yet still be able to utilize a high performance, very compact, SMT on-board power supply without resorting to forced air (fan) cooling.

There are three RPM series available, all with identical pad designs so that they are interchangeable:

Evaluation boards are also available to permit rapid prototyping or to confirm the performance in the end application. The examples described so far have been non-isolated converters. When safety agency-rated isolation is required, necessary creepage and clearance distances define a minimum X or Y dimension. For example, in medical applications with mains system voltages, 8mm creepage is required between input and output for two Measures of Patient Protection (2MOPP). Given this minimum packaging dimension, a more traditional approach can be taken, with an internal die for a power and control IC wire-bonded to a DVE SOIC-16 leadframe, then conventionally over-molded, such as in the RECOM R05CTxx part. The transformer in this DC/DC converter is a proprietary, very low profile, planar-type design, achieving 5k VAC isolation voltage and reinforced, 2MOPP isolation. The overall height of the part is only 2.65mm, making it suitable for card-type applications as the height of the isolated DC/DC converter is not higher as all of the other SMT components. The R05CTxx part offers full line and load regulation with an external enable input. The RECOM R05CTxx delivers 500mW with 5V input and 5V or 3.3V outputs and is particularly suitable for powering isolated interfaces, in critical medical and industrial applications.

The goal of making low power DC/DC converters IC-like is now largely achieved using a combination of innovative 3D packaging technologies, both for isolated and non-isolated parts with further improvements to performance and power density expected in the future. RECOM has a range of products that represent the state-of-the-art in 3D DC/DC converter packaging and offers an evaluation board, showcasing the products mentioned in this article, which can be ordered at www.recom-power.com/3dpp  (Figure 4).

RECOM is an Austria-based power conversion company with a global design and manufacturing infrastructure, with multiple locations in Europe, Taiwan and China. RECOM lowers supply chain risk for its customers with representation by major distributors round the world, offering comprehensive logistics and technical support. 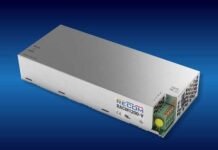