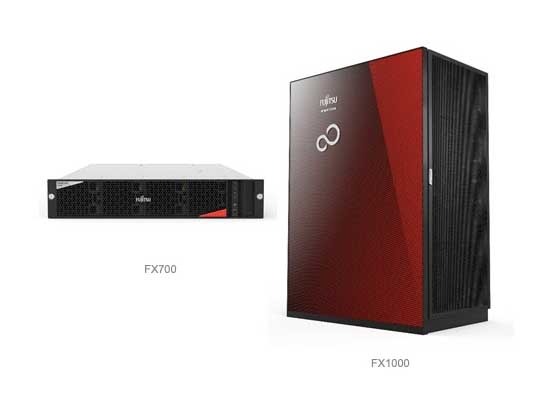 TOKYO, Nov 13, 2019 – Fujitsu has announced that it will begin global sales of the PRIMEHPC FX1000 and PRIMEHPC FX700 models from the “Fujitsu Supercomputer PRIMEHPC” series, which utilize the technology of supercomputer Fugaku jointly developed by RIKEN and Fujitsu. Shipment is scheduled for March 2020.

Both products are equipped with the world’s first CPU A64FX adopting Scalable Vector Extension (SVE) which is an extension of the Arm v8-A architecture for supercomputers. Moreover, the A64FX developed by inheriting the high-performance, low-power CPU design that Fujitsu has developed so far, provides high performance per watt. The CPU not only achieves a high memory bandwidth by using HBM2(2), a high-performance die-stacked memory, but also can handle half-precision arithmetic and multiply-add, which are important in such technologies as deep learning. In this way, the new supercomputers are expected to expand its use in the field of AI.

With support for the same Tofu interconnect D as Fugaku for maximum scalability in large configurations, and ultra-dense implementation of up to 384 nodes per rack, FX1000 can efficiently build large systems that deliver theoretical computing performance in excess of 1.3 exaflops. This model uses a water-cooling system, aiming for high performance and reduced total energy consumption including in cooling.

FX700 is based on the standard technologies for supercomputer systems, supporting InfiniBand as an interconnect and using open-source software (OSS) for HPC middleware. By adopting an air-cooling system and a chassis that can be mounted in a standard server rack, this model is designed to be easily deployed for customers.

Contributing to the development of the Arm HPC Ecosystem

Fujitsu participates in open communities such as Arm Developer, Linaro and OpenHPC, devoting to develop the Arm HPC ecosystem by bringing the company’s high-performance computing (HPC) technologies and knowledge to the community. In addition, Fujitsu plans to work with application vendors to be available commercial application software for PRIMEHPC, including the crash analysis application LS-DYNA, which is widely used worldwide.

By developing and offering high-performance supercomputers, Fujitsu will continue to contribute to the resolution of social issues, the promotion of leading-edge research, and the enhancement of corporate competitiveness. In particular, the company will develop new drugs, realize a safe and secure society through disaster prevention and reduction, while establishing no prototyping in the development of new materials and manufacturing.

Comment by Chris Bergey, Senior Vice President and General Manager, Infrastructure Line of Business, Arm – The arm has leveraged our strategic collaboration with Fujitsu and RIKEN to evolve our architecture and advance the innovation and performance of Arm-based processors for HPC. We value Fujitsu’s strong commitment to bringing their cutting edge A64FX chips to market with the announcement of the PRIMEHPC FX1000 and FX700 supercomputers and believe they are industry-leading building blocks for exascale systems.

Comment by Stefanie Chiras, Vice President and General Manager, Red Hat Enterprise Linux, Red Hat – Today, Linux is synonymous with supercomputing, providing the scale and flexibility to fuel the next generation of innovative HPC applications. We’re pleased to collaborate with Fujitsu in bringing the world’s leading enterprise Linux platform, Red Hat Enterprise Linux, to its new line of supercomputing models, providing a more stable, reliable and supported open platform upon which advancements in data science, AI, scientific research and more can be based.

AAEON Release BOXER-8251AI Greater Flexibility for AI at the Edge

Fujitsu, RIKEN Ranked No 1 Worldwide in TOP500, HPCG, and HPL-AI with Supercomputer Fugaku